When you open or import an image in Corel® PaintShop Pro, the image will appear as a single layer. This image will be labeled as Background, Raster, Vector, or Art Media layer. Each additional layer that is added will create a transparent sheet over the first layer. As you add brushstrokes, objects, or text, a new layer is created over the Background.

There are nine types of layers to select from: Background, Raster, Vector, Art Media, Mask,Adjustment, Group, Selection, and Floating Selection.

1. Select the Layer menu option
2. Select Promote Background Layer
3. Then to move the layer, simply Drag and Drop it in any spot in the Layers Palette

If you create a new image with a transparent background, it does not have a background layer, and its bottom layer is a raster layer named “Raster 1.” You can move this layer anywhere within the stacking order. You can also change its opacity and blend mode by right-clicking on the layer and selecting Properties from the menu. In the Layer Properties box, you can select these item from the General, Blend Ranges, and Layer Styles tabs.

Corel® PaintShop Pro supports transparency on all additional layers other than the Background layer. To create an image without a transparent areas, choose a solid-colored background when creating a new image from the File menu.

Raster layers are layers with raster data only. Raster data is composed of individual elements, called pixels, arranged in a grid. Each pixel has a specific location and color. Photographic images are composed of raster data. If you magnify raster data, you can see the individual pixels as squares of colors.

Raster layers let you display subtle changes in tones and colors. Some tools, options, and commands apply only to raster layers. For example, the painting tools and the commands that are used to add effects can be applied only on raster layers. If you try to use a raster tool while a vector layer is selected, Corel® PaintShop Pro prompts you to convert the vector layer into a raster layer.

Mask layers show or hide portions of underlying layers. A mask is an adjustment layer that can modify the opacity of that particular layer. You can use masks to create sophisticated effects, such as a picture frame that fades away at the center to reveal the subject. Mask layers cannot be bottom layers. You cannot delete other layers if deleting them would cause a mask layer to become the bottom layer. 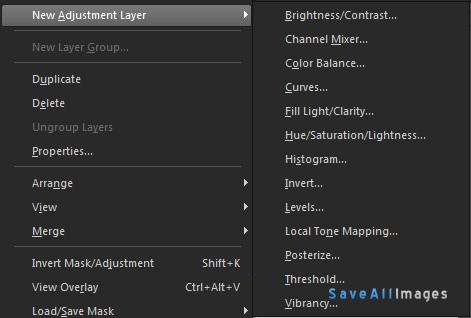