Note: This article ONLY applies to anyone who has purchased the box version of PaintShop Pro X5 Ultimate from a North American retail location. Areas outside of North America have not been affected.


The first release of PaintShop Pro X5 Ultimate included a manufacturing issue for the FaceFilter Studio2 serial number. There have been several discs that were shipped to North American retail stores that included the prefix: SKRRFF2.


This prefix is not to be included in with the serial number when trying to install FaceFilter Studio2 from the 2nd DVD in the box set. The serial number should include 4 sets of 5 characters (a combination of letters and numbers), plus 1 set of 2 characters all separated by hyphens or dashes. (see example below) 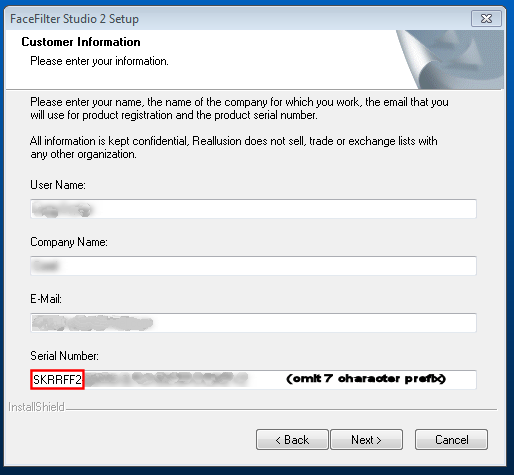 If you do attempt to enter in the serial number with the prefix SKRRFF2, then you will receive an error message similar to the image below:

Corel is aware of the manufacturing issue, and we are ensuring that as few copies do arrive to the public. No replacements are necessary as the serial number provided will work as long as the 7 character prefix is not included when entering the serial number during installation of FaceFilter Studio2.