Corel® Painter™ has long been my program of choice for drawing, painting, and creating stylish portraits from photographs. One thing I use Painter for that's rarely covered is restoring old or damaged photographs and paintings. A perfect example is the opportunity I had to help a church, Chiesa Della Liberia, in the Italian province of Naples. Located in the town of Saviano, the church asked me to restore a beloved painting that had been damaged while the church was being restored. The only record of the image was a faded snapshot, and the top quarter of the photo was missing. I was told that the missing section depicted a dove that symbolized the Holy Spirit. 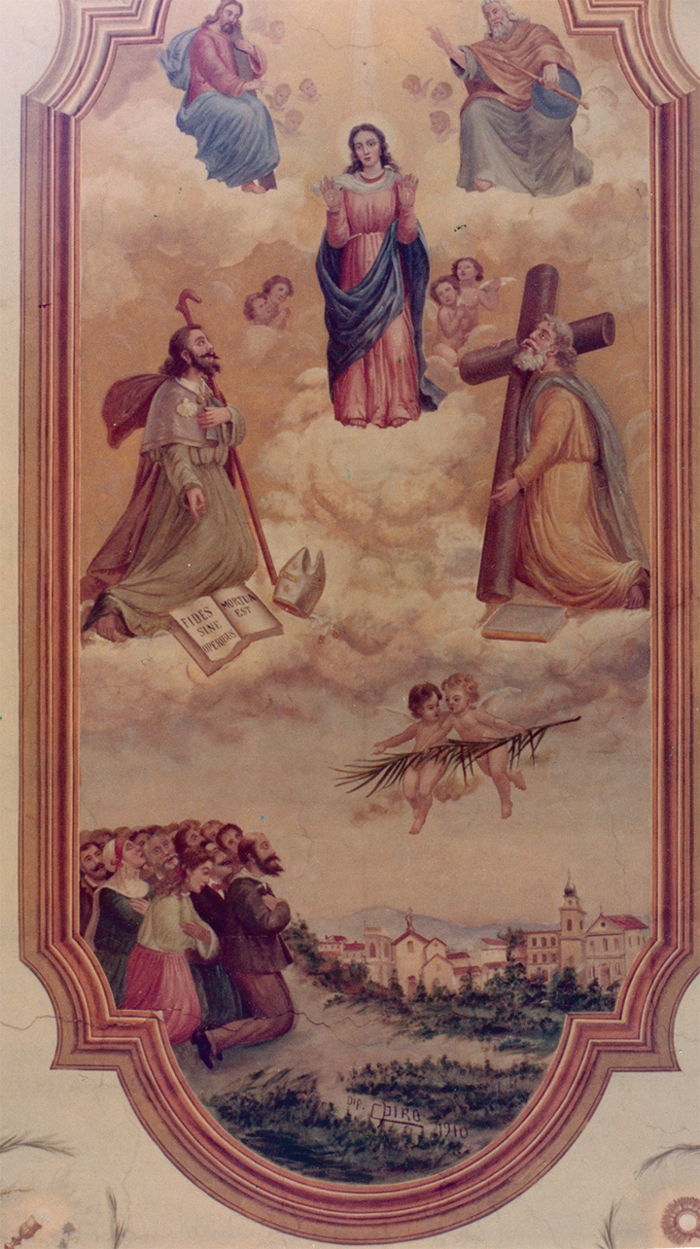 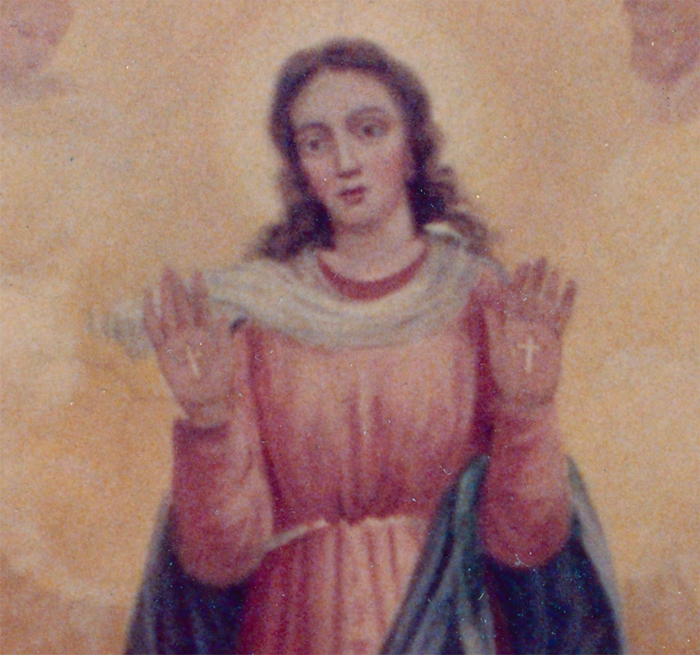 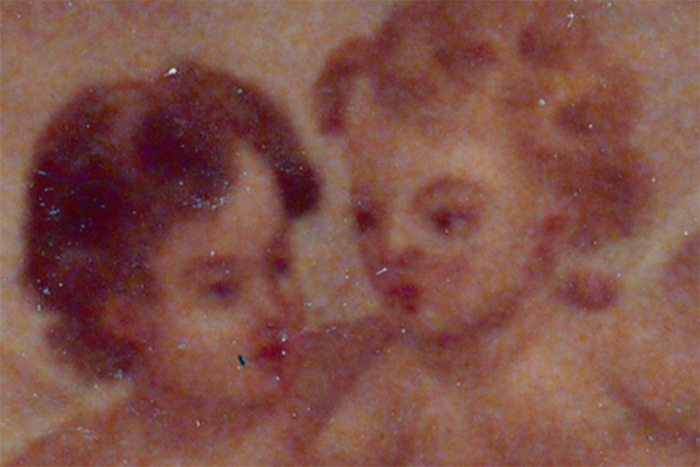 I inspected the old photograph using the Zoom to Actual Pixels command (Command + Option + 0 on the Mac OS or Ctrl + Alt + 0 on Windows) and discovered that it was deteriorating both in color and grain. Traditional methods of photo restoration would take months, maybe years. In addition, the church was hoping for a quick turnaround, and there was no budget to fund the restoration. It was one of those jobs one takes because one has been blessed with the talent to do it, and because it means so much to someone else — in this case, an entire congregation. In spite of the large file size, 138 MB, I decided to use Painter for the bulk of the restoration. In effect, I was going to have to repaint the image with new colors, blending the extensive damage into the new paint. 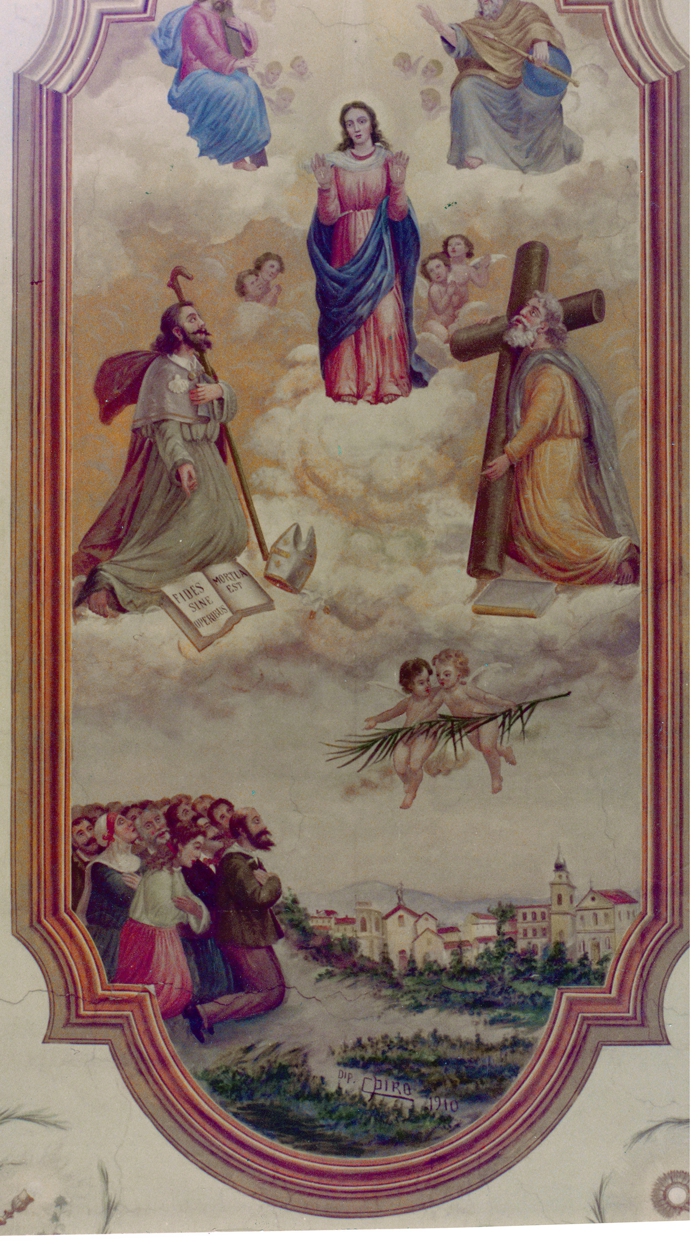 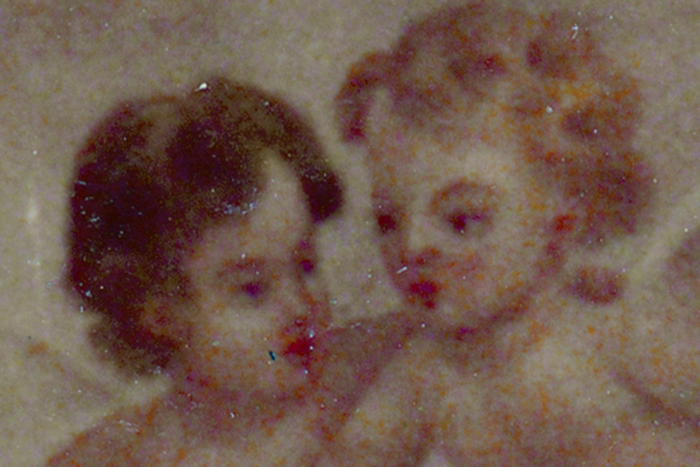 Next, I addressed the details of the painting. I researched the painting's nineteenth-century artist, Cipro, hoping to learn something about him and see more of his work so I could reference it for colors and style. I didn't find out much, but I did learn that he created it in a traditional Old Masters style, a type of painting that pre-dated Cipro by at least a century.

I used the Grainy Water variant from the Blender brush category for a simple overall blend to preserve as much contrast between strokes as possible. My goal was to remove the grain while following the strokes of the original artist. It was an odd experience for me. Over a century after Cipro had painted it, here I was using a computer to replicate the style and strokes of someone who was also replicating style and strokes of artists from another century.

Gabriele Piero, the church representative, also asked if I could make the painting rectangular by extending the corners, making framing the restoration easier and more cost-effective and opening up the possibility of making small prints for the members of the congregation. I freehand painted the extensions of the foreground and people in the crowd, using a combination of brushes and blenders. I also airbrushed the sky and background with colors that were often used in that time period. I also added reds and yellows to the skin tones to make them more robust. 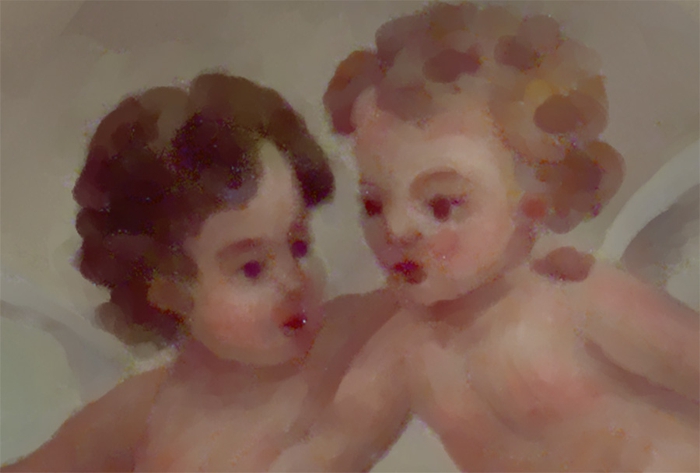 With this preliminary work completed, the painting was taking shape, but looking flat. Blenders are great for removing grain and small damaged areas, but the trade-off is that they bring all value to a mid-tone range.

It was time to bring the painting to life. I started by dupliating it twice. Then I changed the composite method (the Painter equivalent of a blending mode in Adobe Photoshop) of one copy to Screen and the other to Multiply in the Layers panel. Next, I applied layer masks and used a variant from the Airbrush brush category to add contrast and shape to the clouds, clothing, and faces. In addition, I continued to build shape, color, and detail using the airbrush. 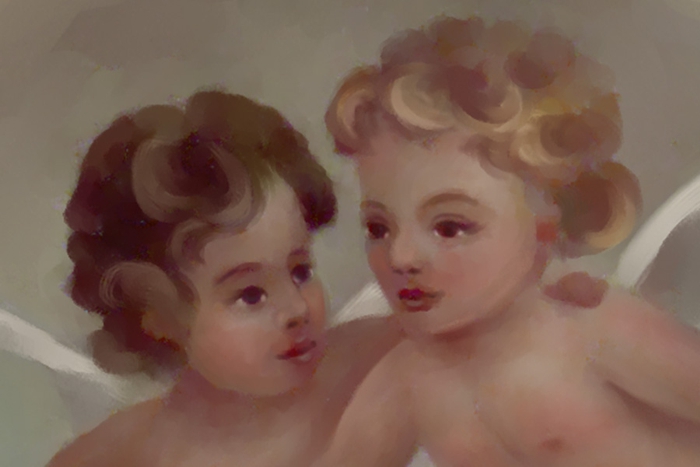 Finally, I was able to work on the dove. I researched art history to see how doves have been used to symbolize the Holy Spirit and found several options: doves standing in the sky wearing crowns, doves flying up, flying down with wings spread over the earth, holding laurel in their feet or beaks. This gave me lots of freedom with the dove. I decided to paint the dove flying forward, with wings outstretched, no laurel. I also decided to go with the same approach Cipro used with the angels and make the dove part shape, part cloud. I did this by adding a few identifying strokes with white, dark brownish gray, bluish gray and orange, then shaping and blending using the Grainy Water variant from the Blender brush category. 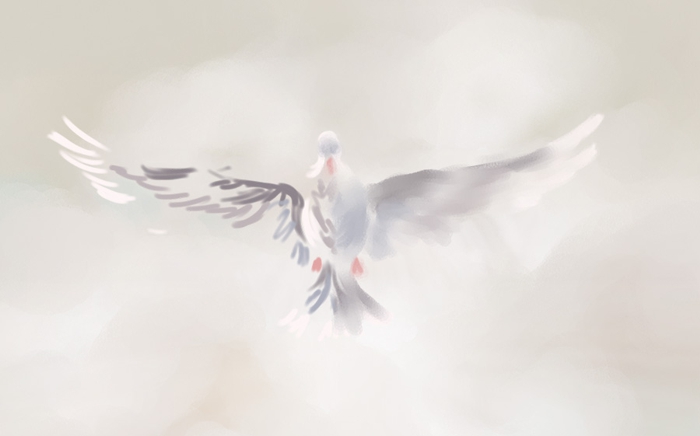 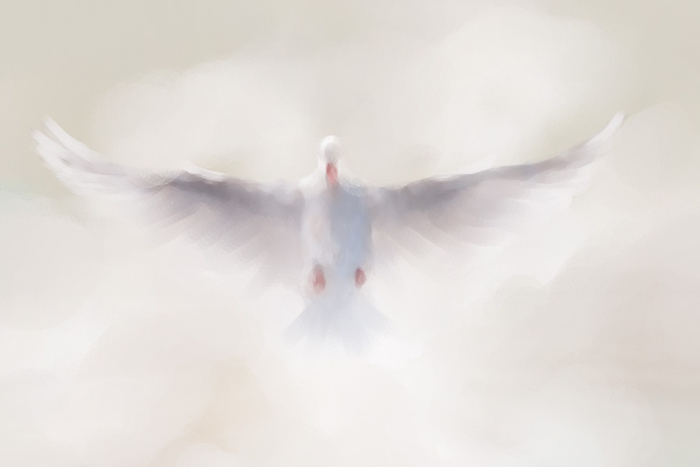 At this point, the painting was nearly complete, but it was missing one important element: light. I went over the entire painting one more time using the Screen and Multiply composite methods with layer masks. I finished things up by taking the image back into Adobe Photoshop where I added a beam of light using a lovely special effects brush created by Obsidian Dawn. 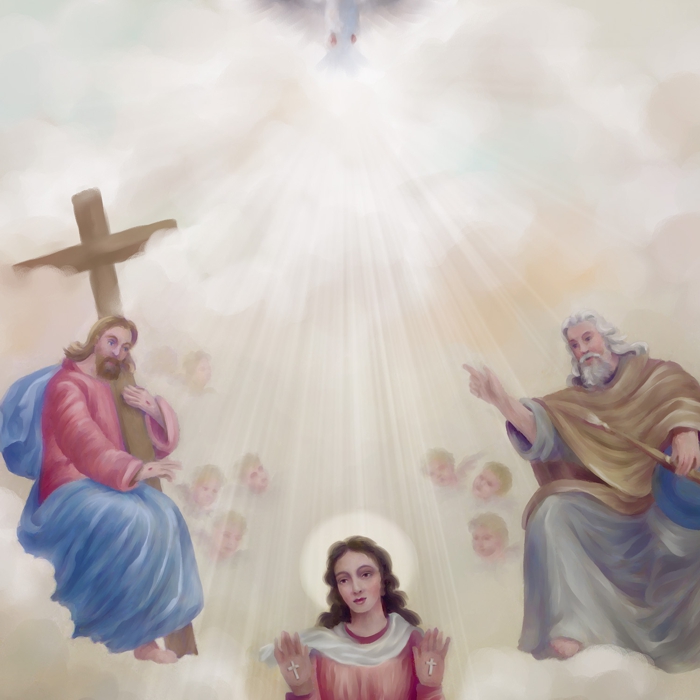 The printing and installation of this restoration is another story in itself. I knew the painting was going to be large, but I had no idea that Gabriele Piero intended to send it to Florence for output onto a canvas 5.5 x 14 meters. (I thought it was going to be 14 FEET — I need to learn more Italian!) The canvas ended up being 18 feet by just over 42 feet and weighed almost as much as I do. Gabriele's team built a special stretcher bar that could be expanded after the canvas was secured to the ceiling, and accomplished the installation on rather wobbly scaffolding. A small bit of damage was repaired using acrylic paint mixed with gloss. 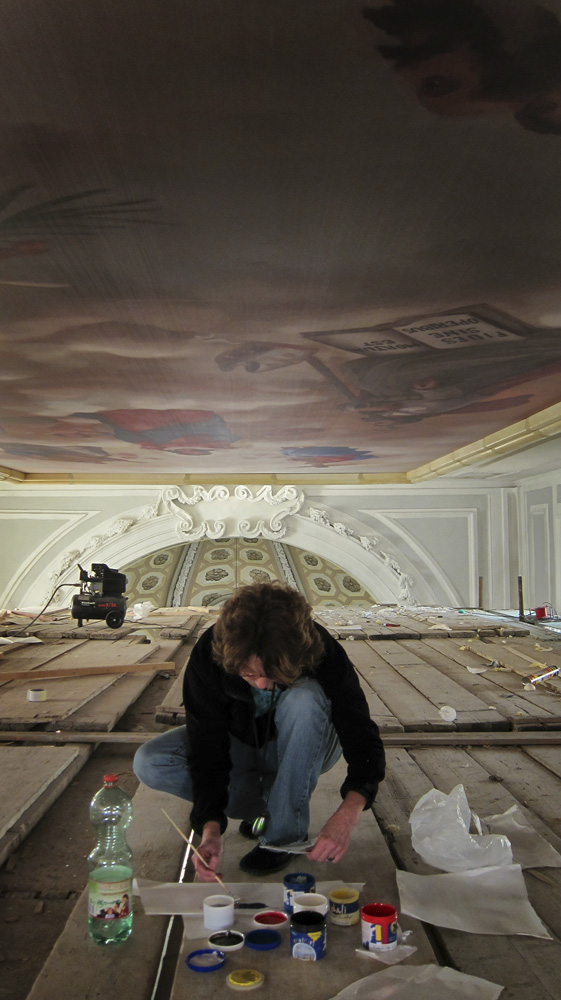 The installation and Gabriele's team of crazy Italian dreamers can be seen on my Facebook page (www.facebook.com/janecz) in the “Chiesa Della Liberia” photo album. Copies of the painting can be purchased through my website, www.janeconner-ziser.com, and I donate half of the profit to Gabriele's church in Saviano.

Restoring this treasured painting was a challenging job, a lot of painting, and an amazing experience. Honestly, I didn't use any special brushes or sophisticated tips and techniques. All it took was patience, respect for the artist that painted the original with devotion, and the educated brush strokes of another artist who wanted to give something back to the people of Saviano, who had enriched her life with their friendship.

Gabriele is also selling copies of the painting, and I love knowing that the parishioners can have a copy in their homes. It's pretty overwhelming to see how big the final canvas is. I screamed “NO WAY!” when I saw it. Over the top, delightful and full of life, those crazy Napolitanos have made my life huge, and I love them! Grazie, Gabriele. Grazie, all.

Jane Conner-ziser is a photographer, author, retouching expert and fine artist. She resides in Ormond Beach, Florida, but teaches all over the world. To access her schedule, book classes, purchase her educational products or get in touch with her, please visit her website at www.janeconner-ziser.com.