The Golden Mean And The Rule Of Thirds

The Golden Mean  and the Rule of Thirds are arguably the  strongest, most important rules of composition.  They tend to provide the overall framework for an image, creating “balance” and allowing other compositional elements to work within your photo. At the very least they’re a good starting point when composing a shot.

The Golden Mean or Ratio
When two things are proportionate to each other in the ratio 1:1.618 they are in the Golden Mean.

A line divided by this ratio would look like this:

A rectangle with Golden Ratio proportions.

So what is so fascinating about this ratio? In nature the Golden Mean occurs everywhere... from the classic example of a Nautilus shell to the formation of galaxies, from the relative size and arrangement of bones in your arms and hands to the growth and shape of trees and forests, it is also used in complex economic equations and it is claimed that its even found in the very structure of your DNA.

For whatever reason that this occurs in nature, our minds seem hardwired to recognize this pattern if even just subconsciously and as a result, images that conform to this pattern are perceived of as pleasing to the eye.

So how do you apply this?  In visual art this is applied by subdividing your image by this ratio.  The resulting image can look like this.

Notice that even without any subject matter the image clearly focuses the eye to the lower right section of the image creating a point of interest.  You would in this instance place important subject matter around that area.

Balance comes into play here too. The larger number of smaller rectangles on the right balances out the overall larger, yet empty left side of the picture. Arranging your composition around these lines with help to give your picture better balance.

While this works great for painting or drawing it is somewhat complicated and hard to envision through the viewfinder of your camera while you’re trying to compose your shot and deal with whatever other distractions you may face in the field...

This is where the Rule of Thirds comes in.

The Rule of Thirds is basically a simplification of the Golden Rule.  While its ratio doesn’t equate to that of 1:1.618 its proper implementation in composition will give you roughly the same desired effect but is very easy to envision and implement compared to the Golden Ratio.

Here's how it works:

1. Divide your image into 9 equal parts, three vertically and 3 horizontally (essentially an X and O board). 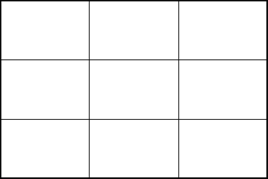 2. Using these lines as guides, place objects of interest at the intersections of the lines, this keeps the eye within the picture.  Notice how these locations more or less align with the point of interest in the Golden Ratio example.
(Note: You can’t usually physically re-arrange the elements of your photo unless you’re doing studio or still life type of photography so by “place elements” what is implied is reposition your camera to arrange the elements within the frame)
3. You will often hear photographers talk about weight or balance in an image.
This is much easier to see with these lines in place.  If you place the elements of your photo two thirds to the right or left it again generally becomes more pleasing to the eye. If shooting vertically, try placing your horizon two thirds of the way up or down.


The Rule of Thirds is very simple but can become quite complex in its implementation... Don’t over think it. Elements in your photo will often conflict. Placing one thing two thirds to the left my cause another element to be in a place that doesn’t conform with the rule of thirds... that's just the way it is, you will usually be able to find a nice balance between the conflicting elements or simply have to decide which one is the strongest most important one and place the emphasis on it.

You will rarely center objects or horizon lines in an image but there are times when you may wish to convey strong symmetry or perhaps a portrait or a head shot. Remember these rules are meant to be flexible and are by no means going to always apply. There will always be elements in any photo that will conflict with themselves or other rules of composition, its just a matter of finding the right combination and balance of these elements to best suit each photo.

- Try cropping images in your photo editing software to see different results from the same picture.

- Divide your TV or computer screen into thirds and just watch anything.  I recommend good visual documentaries or animation.  You will immediately see how photographers arrange the elements in their shots to comply with the rule of thirds.
Some tape and string will do the trick... This used to be very easy on old tv sets that would collect dust on the screen, you could just draw an X and O board in the dust and it worked perfectly... not so much with flat screens as they don’t gather as much dust)

- Throughout your day, look around you and try to compose shots based on what you see.  Picture the borders of the photo and figure out how you would arrange the lines and subjects inside that frame.  After you’ve been shooting for a while you may eventually find yourself doing this automatically all the time.

- Many cameras now will superimpose the thirds graph over their viewfinders.  This is an excellent tool to use to learn this concept.  Try not to become too dependent on it though as it may lead to too rigid an interpretation of the rule of thirds.

If you enjoyed this tutorial, be sure to check out the other tutorials that are available in the Discovery Center.  If you have any ideas for tutorials or projects that you would like to see in the future, please leave us someFeedback.